Showing posts from 2009
Show All 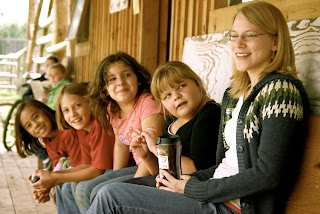 I hope you all had a lovely Christmas, celebrating the birth of Jesus and enjoying the company of your family and friends! Here at Evergreen, we're basking in the snow and cold. All of us staff had the opportunity to take off for a couple of days to spend time with family and friends -- we were in Medicine Hat, Edmonton, Spruce View, Red Deer, Calgary and Maple Ridge (obviously, not all of us were in all of those places)! Things have picked right back up again on site on Boxing Day, when a group of 30 youth pulled in for trail rides, climbing, games, chapels and general fun and excitement.

Thank you for you generous responses to my "Yearend Giving" blog post. I have been repeatedly wowed by people's generousity and their commitment to ministry here at Evergreen! So, thank-you!

Summer 2010 registration will be available online really, really soon (by January 6, if not before): check our main website, www.camp-evergreen.com, to register for summer cam…
Post a Comment
Read more

December 14, 2009
Are you still thinking about where to do your yearend giving? Well, you should consider us! Camp Evergreen is a registered, not-for-profit organization.

2009 has been a great year at Evergreen -- we had 646 adorable, hilarious and totally rad campers this summer (interestingly, the exact same number we had in 2008). Our spring and fall were booked solidly with guest groups -- fun, friendly guest groups no less! We had great seasonal staff, and a sweet crew that's staying through the winter. We are looking forward to our first official foray into winter outdoor education with a guest group in early January. We received some fantastic gifts, including a van full of flour, new aluminum canoes, a scanner, snowshoes and a new gator.

The one sad spot? General donations! Donations have come in below what we budgetted for consistently this year. Can you help us change that, in these last two weeks of 2009?

We know that it has been a hard year for a lot of folks, with recession woe…
Post a Comment
Read more 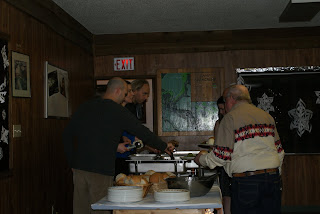 If you live in Alberta, you know that the weather was not the greatest last weekend. The Calgary Police apparently responded to 110 accidents within four hours on Friday. The highways were ... scary. As a result, we cancelled the Christmas Banquet, sort of.

Instead of our planned 60+ guests, we had a quieter night with 25 friends: of our neighbours, who all still came out, along with two Medicine Hat couples, one Red Deer family and a Coaldale couple. We salute you all for your bravery, and thank God you made it here and back safely!

Even with a much smaller group than initially planned, we had a great night: yummy food (thanks, Ken!), good visiting, happy carolling (thanks, Colleen, Sydney and Kiah!) and some of us played fun games after dinner.

Left: Sydney and Colleen lead Christmas carols.
Right: Kiah joins the Reimer ladies to help with actions for "Away in a Manger"


Since we didn't get to say it to everyone we'd hoped to at the banquet: thank you aga…
1 comment
Read more

December 04, 2009
I don't actually know if I have the words to explain how excited I am to announce that Robin Jones Gunn is going to be our speaker at Ladies' Retreat, from April 16-18, 2010. Indulge me while I tell you why I'm so excited, okay?

I grew up reading Robin Jones Gunn's Christy Miller series. The Sierra Jensen and Todd & Christy: The College Years series came out when I was done high school; I've read them all (Doug & Tracy got married on my birthday in the sixth Sierra Jensen, With this Ring, which I thought was pretty great). I've read the Glenbrooke series more than once and have recently been reading Sisterchicks books, even though they're about women quite a bit older than me. Even more recently, I've been reading the new Katie Weldon books as they come out. This summer, I had my mom express mail two copies of the third Katie Weldon book for Ashley and me the day they arrived in the bookstores.

Anyway, shortly after I finished my BA, I re-re…
3 comments
Read more

December 03, 2009
As you may know, Camp Evergreen is hosting its first ever Three-on-Three Pond Hockey Tournament on January 9. Huzzah! It's going to be very, very, very fun. And we still have space for a couple more teams, if you're interested (call me, Kerry, at 403-638-4230, if you want more information).

We're working on the three ice surfaces we'll be using for the Tournament. I was starting to worry that it would never get cold enough to make good ice, but God has provided us with wonderfully freezing weather and the ice is underway! Dave, Emily, Colter and Erin have been flooding the "upstairs" rink, and yesterday, some of us broke in the ice. Wanna pretend you were there? 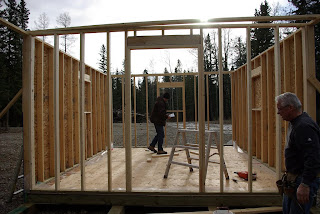 I know! You're dying to know where we're at with building the first cabin!

The first layer of the roof is in place and the cabin has been wrapped in Tyvec. (I'm learning all sorts of things, like what Tyvec is.) The tin for the roof is on order and willing arriving late next week and the windows are awaiting pick up at Wild's Home Hardware. We won't be doing the final layer of siding (which will match the outdoor bathrooms) till the spring: we'll do all the cabins at once.

We're planning to get the tin on the roof next week, before the Christmas banquet. I'm excited about that step! The green tin is so pretty, I think. (If you've been here, it's on the lodge, Cabin 15, the outside of the Activity Centre and the roof of the Welcome Centre.)

Top Left: Kevin and Richard survey the cabin, before getting started for the day.
Top Right: Erin and Emily are wildly excited to spend the day with the building crew.
Bottom Right: Richard peeks out over the…
1 comment
Read more

cake is better than pie. 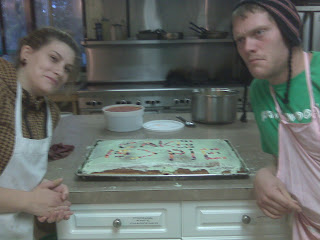 In October, a debate raged about the virtues of pie versus cake. Cake won.

On the left, Allison is pleased to be crowned winner while Chad sorrowfully contemplates his loss.
On the right, proof is in the pudding, by which I mean cake. 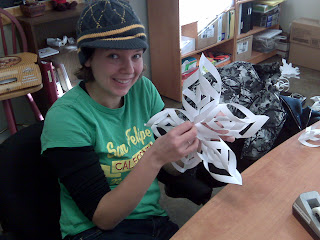 We woke up to a light cover of snow today; I was so excited. As much as I appreciate the slippery-free roads, it just feels to wrong to be without snow in November. (Plus, I've been listening to Christmas music, on and off, since late October ...)

Anyway, the actual point of this post is to tell you that Julia and Colleen are prepping for our Christmas Banquet at this very minute! Colleen's office is turning into a miniature winter wonderland, sprinkled with gigantically oversized snowflakes.

Now that we're talking Christmas, my uncontestably favourite Christmas album of all time is A Christmas Album by Amy Grant. I love it. And I just found this gem on YouTube (apologies for the poor sound):

November 19, 2009
Cabin building is continuing -- the guys will be out tomorrow again to work on the sheeting. I thought I'd share a little "three days of progress" video with you. 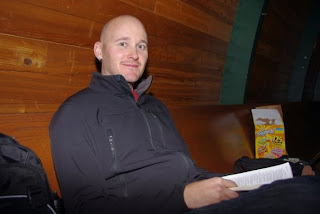 The Uprising is our College & Careers retreat -- we had about 40 retreaters and volunteerers and musicalplayers here for two nights and it was great fun!

Troy Taylor, our speaker, is the IVCF staff at the University of Lethbridge. He spoke about what it means to stand for Christ, using Paul's conversations with the people of Athens in Acts 17, as a model. We talked about providing an applicable and appropriate response to others' questions and situations; we talked about trustiworthiness (note to self - telling Courtney that rugby isn't a real sport is a quick way to lose her trust); we talked about what it means to be compelling by believing what we say and drawing people into the next step; and about giving honour to where people are at. Stand up! 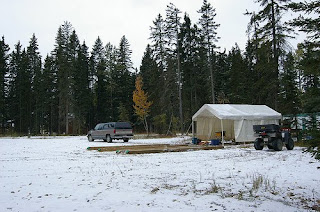 Huzzah!* The building has commenced! Last Saturday, October 10, Kevin & Jen & kids, Andrew & Lisa & kids, Matt and Richard joined Dave in the RV sites to begin work on Cabin 1! Actually, it'll probably be Cabin 12-14 or 16, because those puppies will be the first to go.

Kevin, Andrew, Richard, Matt and Dave made a good start on the cabin. Lisa, Jen and I cooked ... deliciously pre-cooked food (thanks Ken!). Andrew managed to find time to take some photos as they built, so check it out!

Left: The build site, with just the skids on the ground.
Right: Skids.

Left: Kevin and Richard weren't cold at all (it was only -15 with the windchill, after all).
Right: Fortunately, to offset the cold, a coffee break!

Left: Richard and Jesse measuring.
Right: The first wall is up!

The second wall is up!

Left: Frame of the back wall.
Right: Our handsome building crew.

* "Huzzah!" is actually a play on words, because back in the …
2 comments
Read more
More posts