Showing posts from November, 2018
Show All

Ten years ago, an idea was born... Let's invite people to raise some money and play some hockey.  A pretty novel and pretty brilliant idea our Executive Director and (one of the) biggest Oilers fan I've ever met, Kerry Precht, can be thanked for. The tournament has brought players back year after year - many saying that it is what they scheduled their January around. It has been a day that many people come together each year to make happen. We had a humble beginning in 2010. Six teams and one ice rink. Our Site Manager, Dave Reimier had built a pull "zambonie" to flood the ice which we still use today (with some modifications). We raised $10,128 that first year. Our first Pond Hockey Rink in 2010 Our second, third, and fourth years showed a lot of growth. Six teams grew to eight which grew to ten. Need for a second rink was evident as was a tightening of the rules...who knew hockey players could be so competitive?!...Okay, okay - well...maybe we knew that al
Post a comment
Read more

Stories from the Amazon 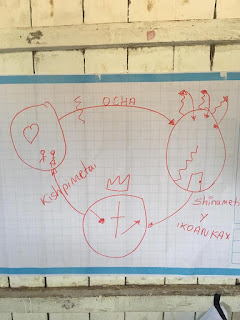 I've been wanting to do a follow up Blog from our LEAD weekend that we had at the end of September. I have to say - it was one of my favourite youth retreats that we've EVER had at Evergreen. We had 150 youth and sponsors here getting equipped to go out and be active in their faith. Nearly everyone learned atleast two simple tools to go out and share Christ with someone near them. It was an amazing weekend! Danny MacKay from I am Second and e3 Partners was our main session speaker and his stories about taking advantage of every moment he's breathing to share Christ's love with people around him was so inspiring. If you were at the retreat - you will remember Danny talking about what was coming up for him after LEAD. He was going to be going into the Peruvian Amazon to three villages that were unreached by Christians. Well - Danny just got back and I'd like to share his stories and some pictures with you from his trip that I think might encourage you - they sur
Post a comment
Read more
More posts