Showing posts from June, 2010
Show All

alexis is a spring staffer! 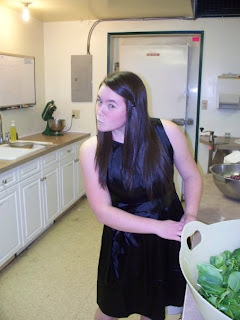 Name: Alexis Smith Hometown: Maple Ridge, BC. Where we'll find her this spring & summer: Down by the creek (where the watermelons grow) and the pond, catching frogs and up to her neck in mud, for pond study. And at the teepees for Roughin' It Girls . How many years she's been coming to Evergreen: Four years. Three favourites: 1. Hiking. 2. Being outside. 3. Smiling. 4. "Love Me Good" by Michael W. Smith (see below). Three not-so-favourites: 1. Vegetables. 2. Cliques. 3. Being sick. Best camp memory: I was in the brown house (girls' staff housing), feeling sick, and Courtney on over the radio to say, "Alexis. Be in the parking lot in two minutes because Kerry's on her way and she saw moose." I dragged my sick self out to the parking lot and we drove back to where Kerry had seen the moose (baby twins!) on the gravel road on the way into the camp, and we watched the moose for 15 minutes. It was pretty cool. What she's most
Post a comment
Read more

review: garage sale in edmonton (or, good times in the sun). 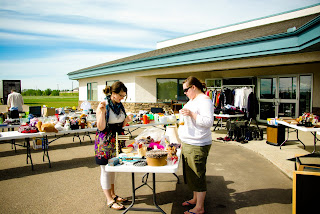 At the beginning of June, at the same time as the fantastical Fathers & Sons Retreat (I can't decide ... should it be "Father & Son Retreat"? "Fathers' & Sons' Retreat"? Fathers & Sons' Retreat"?), a couple of us (Kerry, Trenton , Jenny ) headed up to Edmonton to run a garage sale as a fundraiser for the camp. We were joined by Bethany, an Edmonton-based friend of Evergreen, and we spend two days in the hot, hot sun at River West Christian Church (who had kindly donated its parking lot to our cause). We had some great donations (an organ! a dog ramp! a dogloo! a turkey fryer! great outdoors stuff!) and we did okay. I have ideas for how to run more successful fundraising garage sales in the future. Anyway, some pictures:
Post a comment
Read more 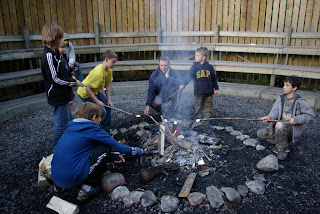 I am way behind on my blogging! Two weekends ago, June 4-6, we hosted our first ever Fathers & Sons retreats. I'm hearing it was pretty epic. Our speaker was Kevin McInnes, from Sunwest Christian Fellowship in Calgary. Kevin is great friend of ours. He presented our grandfathers, fathers and sons with challenges and talked about what it means to be a Servant Warrior! The grandfathers, fathers and sons roasted marshmallows, chilled at the creek, built and launched rockets, zipped, paddled and lots more. We already have lots of ideas for next year: June 3-5, 2011! Guys who attended the retreat: do you have stories you want to share? Head to the comments section!
Post a comment
Read more

russell is a spring staffer. 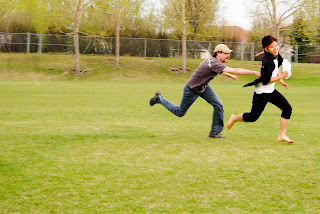 Name: Russell Dunkerly Hometown: Calgary, Alberta Where we'll find him this spring & summer: In the kitchen. How many years he's been coming to Evergreen: Three. Three favourites: 1. A good conversation. 2. Eating lunch. 3. Time with friends. Three not-so-favourites: 1. Early morning. 2. Sore feet. 3. Bad food . Best camp(ing) memory: Learning to ride a bicycle in the Kananaskis. What he's most looking forward to this spring and/or summer: Eating. He can't make it through the day without: Eating. In his opinion, the coolest thing about God is ... His unconditional love. Russell would also like to share that you should eat great food all the time.
Post a comment
Read more 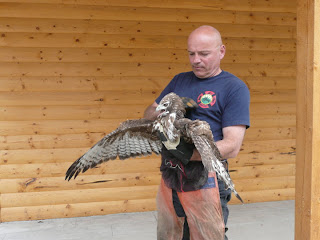 Rolf (pictured above, holding the hawk) found an injured hawk on his property (which borders Camp Evergreen). Part of one of the hawk's wings was missing, so it couldn't fly (well, it "flew" like a chicken does). Rolf called the good people at the Alberta Institute for Wildlife Conservation , who told us to catch it and then they'd come pick it up. So we did. And it was very exciting. The hawk was beautiful and terrifying all at once. Some of the grade six outdoor education kids who were here when we found the hawk were able to see it (from afar, of course), which is a neat addition to the nature study curriculum. Hawky McHawkerson is now hanging out the Conservation people. They're going to fix his wing, which is broken, and once his bones are healed and his feathers have regrown, they'll bring him back to where we caught him, to release him back in the wild. A happy story, right?
1 comment
Read more

colter is a spring staffer. 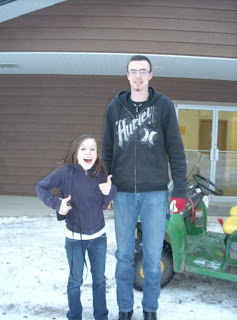 Name: Colter Beam Hometown: Calgary, Alberta Where we'll find him this spring & summer: Assistance Maintenance, aka "helping Dave". How many years he's been coming to Evergreen: Summer 2010 will be year 7. Three favourites: 1. I absolutely LOVE pasta. 2. Working outdoors, with other people. 3. The colour blue . Three not-so-favourites: 1. Rice. 2. Goat cheese. 3. Travelling for long periods at a time. Best camp memory: Playing leap frog from my cabin to the washrooms, where we ate chips and salsa for snack. [Kerry would like it to be known that the eating happened in the common area, not in the actual washrooms.] What he's most looking forward to this spring and/or summer: Learning from Dave and working hard. He can't make it through the day without: Smiling, having fun and laughing. In his opinion, the coolest thing about God is ... how He uses people to do His will. Colter would also like to share that: no one said being a Christian
Post a comment
Read more

allison is a spring staffer. 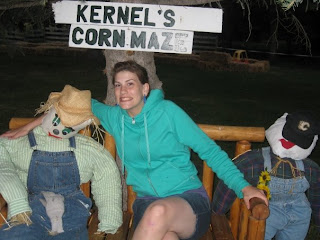 Name: Allison Mary McKaig Hometown: Calgary, Alberta Where we'll find her this spring & summer: ITCs and the wall and CABIN LEADING. How many years she's been coming to Evergreen: Six or seven. Three favourites: 1. The Black Pearl (my truck) 2. The Amazing Adventures of Kavalier and Clay by Michael Chabon 3.Coldplay. Three not-so-favourites: 1. Meat. 2. Mosquitoes. 3. Zucchini. Best camp memory: Howling at the moon as a camper; I think it was in 2006. What she's most looking forward to this spring and/or summer: Helping kids of the wall and at ITCs and other things. Plus dressing silly in the summer. She can't make it through the day without: Reading a book! In her opinion, the coolest thing about God is ... That God gave us this amazing earth to live on where we can have friends and do amazing thing like go swimming and skydiving and other cool things.
1 comment
Read more

julia is a spring staffer. 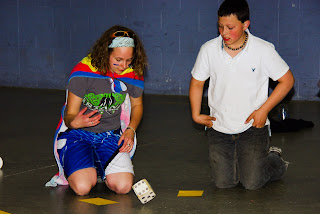 Name: Julia Dunbar Hometown: Red Deer, Alberta (at this point, it could be Camp Evergreen). Where we'll find her this spring & summer: At the barn and coordinating Trails Away ! How many years she's been coming to Evergreen: Four; this will be my fifth summer. Three favourites: 1. Favourite hobbies are rock climbing and horse riding. 2. Favourite movie is Hidalgo . 3. Favourite verse is Proverbs 3:5-6 . Three not-so-favourites: 1. Brussel sprouts. 2. The colour pink. 3. Screamo music. Best camp memory: Taking the WTPs to the creek to swim with the horses. What she's most looking forward to this spring and/or summer: Getting to be on Trails Away and teaching the campers about riding and horses. She can't make it through the day without: Music. In her opinion, the coolest thing about God is ... His creation, the animals and the mountains. Julia would also like you to know that ... Trails Away is going to be a blast.
Post a comment
Read more 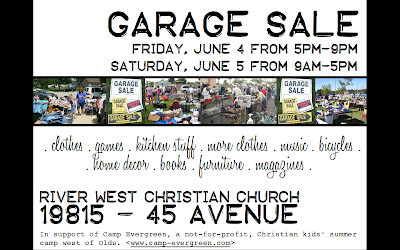 elishia is a spring staffer (and today is her birthday!) 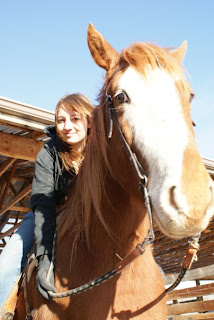 Name: Elishia Sanche Hometown: Calgary, Alberta Where we'll find her this spring & summer: At the barn. How many years she's been coming to Evergreen: This will be summer #3. Three favourites: 1. Horses. 2. Swimming. 3. Coffee. Three not-so-favourites: 1. Cleaning. 2. Snow. 3. Yellow. Best camp memory: falling off of Alice, because she fell. What she's most looking forward to this spring and/or summer: turning 18! (TODAY is Elishia's birthday!) She can't make it through the day without: going outside. In her opinion, the coolest thing about God is ... His grace.
1 comment
Read more

emily is a spring staffer. 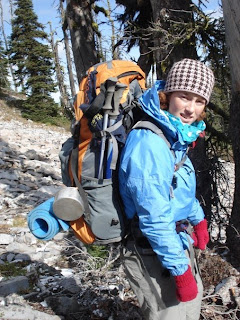 Name: Emily Poulin Hometown: Lac Louisa, Quebec Where we'll find her this spring & summer: Everywhere! How many years she's been coming to Evergreen: We're at 13 months, straight. Three favourites: 1. Climbing. 2. Backpacking. 3. London fogs. Three not-so-favourites: 1. Not being able to look around every day ... at nature, of course. 2. Having to say "good-bye". 3. Laughing at something so hard that I cry and forget to breathe (at my roomie). Best camp memory: Adventure Classic last summer (2009), the Pond Hockey tournament , cutting trees with the boys. What she's most looking forward to this spring and/or summer: Learning more about how faith looks when practiced in a community and I'm just stoked to see God work. She can't make it through the day without: Laughter, music and new stickers ... heehee. In her opinion, the coolest thing about God is ... how he works not only in our lives but all around us. Emily would also like t
Post a comment
Read more

benjamin is a spring staffer. 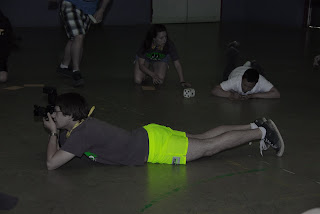 Name: Benjamin Esau Hometown: Calgary, Alberta Where we'll find him this spring & summer: Camp Evergreen, as half of Team Benton -- he'll be in the A/V Office and cabin leading. How many years he's been coming to Evergreen: 12 Three favourites: 1. Food 2. Jug 'n Jog. 3. Food . Three not-so-favourites: 1. Leaving. 2. Whining. What he's most looking forward to this spring and/or summer: Team Benton Version 2.0. He can't make it through the day without: Fresh socks. In his opinion, the coolest thing about God is ... undeserved grace. Ben would also like to share that: coffee makes me happier some days.
Post a comment
Read more
More posts