Showing posts from March, 2009
Show All

you know it's ladies' retreat when ... 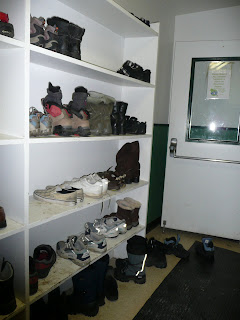 ... the shoes in the bootroom are not only on the shelves, but they're neatly lined up.


We have seventy women on site this weekend for our annual Ladies' Retreat. Donna Carter is here bringing us the Word of God. Colleen, Sydney and Dorothy are leading worship through music. And we're visiting, card-making, trail riding, hot-tubbing, Dutch Blitz playing and more ... 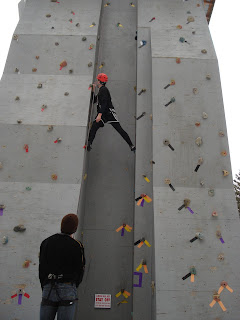 Last week was Reading Week for students at Prairie Bible College, which meant that we had visitors. Emily and Jasper spent the week painting, cleaning, climbing, inventorying, visiting the Parthenon, and hanging out at the Mustard Seed along with the rest of our seasonal staff (in alphabetical order, that would be Erin, Jason and Kristy). When I was in university, I usually spent Reading Week sleeping or in Manitoba just visiting. Emily and Jasper get gold stars for volunteering their Reading Weeks away.


Emily was kind enough to bestow photographic evidence of their visit upon us, so you can pretend that you were here too!

Stay tuned for May 1 - when our Spring Staff arrive (or, stay right where they are), we're going to profiling each one of them ... Emily, Erin, Jason, Jasper and Kristy included. posted by kerry.
2 comments
Read more 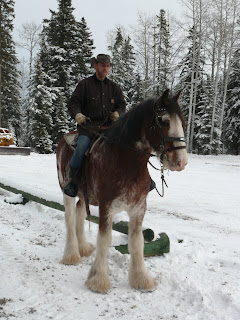 clyding – verb (used without object)
1. to sit on and manage a Clydesdale in motion; be carried on the back of a Clydesdale.
2. to be borne along on a Clydesdale or Clydesdale-like conveyance.

Jon, our faithful Wrangler, has been teaching our Clydesdales, Duke and Diamond, to be ridden (I had to look "ridden" up to make sure it was a legitimate word -- it sounds like one of those fake verb conjugations in the manner of "boughten"). If you haven't met Duke and Diamond, they're our team and they usually pull the wagon. And if you're not familiar with Clydesdales ... they're enormous! They're really beautiful, too. I love their shaggy legs (which is apparently called feathering. Can you tell that I don't work at the barn?) and calm postures.

Duke and Diamond seem fairly comfortable with Jon on their backs, but they most definitely will not be joining the line for trail rides. Riding them is one way to make them increasing comfortable with people an…
3 comments
Read more 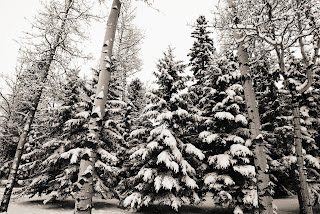 Let's pretend that March is the beginning of the new year. March 1 - February 28 (or 29). That's our newly invented calendar year. And we're resolving to blog more frequently. Hold us to it, okay?
For a brief moment, it appeared as though spring could be on its way. I'm a fan of winter: I like scarves and sweaters, snow and skiing (in theory, if not always in practice), and the pretty prettiness of sparkly snow. But I'm actually kind of ready for spring this year. I like the idea of non-slippery roads and wearing flipflops everywhere. But this morning, we woke up and it is cold, cold, cold today. And that makes me even more excited about the eventual arrival spring and summer.
In honour of the cold, cold, cold, I'm going to post some wintery goodness photos by resident photographer Andrew. (Some will be two, since the internet is uncooperative this morning.) 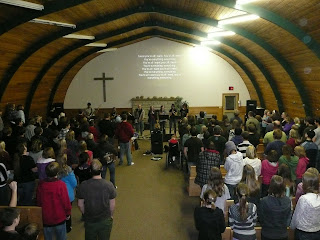 You're all so patient! We've neglected the green spot for an unforgivably long time, but we're back. For today, I'm just going to give you a quick rundown on some of the big events in the last couple of months.

Rise 'n Shine (Junior High Retreat) was waaay back in January and it was super! We had 140 students and sponsors out (Were you one of them? Post a comment and tell us what you thought!), which is a record number for Rise 'n Shine. We played Jug 'n Jog in the snow, sang our hearts out (thank you, Dalhousie Community Church!), heard from God's Word (thanks to Jonathan Klein) and to top it all off? We had the perfect Saturday night for Bible Smugglers. Not too cold and totally still (but, of course, for the creeping of smugglers and the cackling of guards!).